Green roofs reduce rainwater run off by a number of processes:

The ideal solution would be to control water run off at source. However, it is difficult to install containment measures within the urban area where space is at such a premium. Roof planting offers what may be the only real solution.

In addition, vegetation and substrate can absorb a range of pollutants including nitrogen, phosphorus and heavy metals such as cadmium, copper, lead and zinc. This ensures that rainwater is filtered for pollutants BEFORE entering the stormwater system.

This is also useful when the rainwater is collected from the roof in rainwater tanks for use within the building. The rainwater collected will have been through a filtration process on the roof before it is stored.

In many cities around the world it has been recognised that the most significant ecological advantage of roof planting is storm water management. It is hard to come up with average figures of performance, however, roughly 50-60% of rainfall can be expected to be retained by an extensive green roof. Trials carried out at Trent University in Nottingham found that roofs fitted with a vegetation layer growing on a lightweight aggregate substrate layer considerably reduced the volume of rainwater discharged. Expressed as a percentage of the unplanted control roof, the planted roof retained 100% of a 3 mm rainfall, 80% of a 3-23 mm rainfall and for one period where 41mm of rain fell over 47 hrs, 73% of the rain was retained. Obviously, the planted roof is not designed to act as a sponge and eventually the roof will become saturated and discharge water.

Obtaining definitive figures for rainfall retention and discharge rates is difficult because trial observations are affected by a number of factors:

Trials we have carried out on our own systems indicate that between 40-60% of rainfall is retained and the run off time of the remainder is greatly extended. We are continuing to research the effects of the above factors and investigate methods of optimising this aspect of the system taking into account other factors such as weight and plant performance. 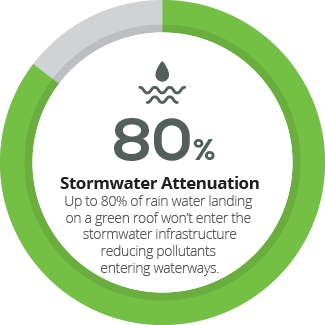 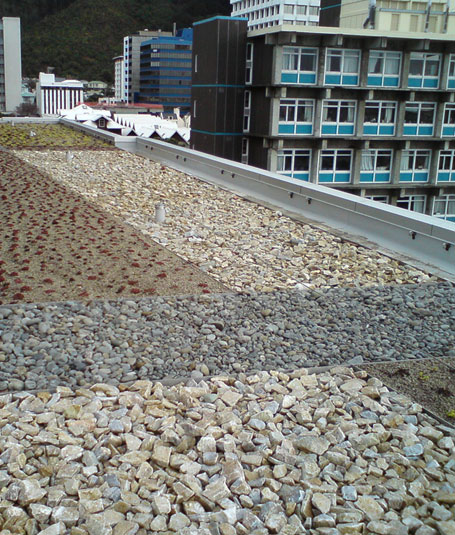